We’re all hands on deck getting prepared for the BFFS National Conference and Film Society of the Year Awards which unfortunately means I’ve been neglecting the blog a little, so in light of that, here’s a rundown of the new titles on the scheme, and a look at the films you’ll be able to preview at the National Conference.

Screenings at the BFFS National Conference

A big part of the National Conference is the opportunity to view some new and forthcoming releases perfect for community cinema audiences. We’ve got a fantastic line-up this year which we’ve just finalised:

The eponymous Gloria is a 58-year-old divorcee; her kids have grown up and left home and she lives alone. But Gloria is a free-spirited and independent woman determined not to give up and she throws herself into life once again. She soon meets Rodolfo – also a divorcee – and while their new relationship is initially successful it is inevitably strained by their complicated situations. Gloria‘s greatest strength is its characters, and the performances that give them life. Paulina García who plays Gloria is particularly good and imbues her character with such vitality, enthusiasm and wit that it is a genuine joy to watch her. Gloria also manages to successfully and subtly invest its story with details about contemporary life in Chile and in doing so makes for an insightful commentary on Chilean society. A remarkable, genuine story. With thanks to Network Releasing.

Though there are no reported incidents of a killer whale killing a human being in the wild, the same is not true in captivity. The most high-profile example is that of Dawn Brancheau, one of Seaworld Florida’s most experience trainers. In February 2010 Brancheau was killed by a killer whale named Tilikum shortly after a public show. This was the first time that Seaworld had lost a trainer, and the event instigated Cowperthwaite’s investigation into how the treatment of whales in captivity has provoked dramatic behavioural changes. Combining shocking footage and expert testimony, including ex-Seaworld employees, this riveting documentary forces us to question the way in which we treat animals in captivity. With thanks to Dogwoof.

Koreeda’s focus is once again on family in this delightful, heartfelt film. Ryota is a successful, but overworked architect who has brought up his son, Keita, in a hard-working strongly disciplined manner. As such Keita is a quiet obedient, but intelligent child. Ryota’s family unit is thrown into disarray however when he is contacted by the hospital to inform him that shortly after birth his biological child, and that of another family’s were accidentally swapped. After a meeting with the hospital and the family of his biological son, Ryusei, the two families agree to swap children, but to do so gently so as not to disturb the kids routines too harshly. Ryusei’s family is the polar opposite of Ryota’s, he is lazy and poor when it comes to work but joyous and kind with his family, giving Ryusei a more carefree upbringing. This set-up allows Koreeda to explore question of parenthood, family and the bonds that we form with our loved ones in a humorous and moving film. With thanks to Arrow Films.

The collection is made up of the award winners from last years Encounters Short Film Festival and we’ll be screening 5 of them at the conference:

In 1943 an old sculptor and his wife live in a small town on the border between occupied France and Franco’s Spain. 80 year-old Marc Cros has not sculpted for years; disillusioned by two world wars, the artist has lost all faith in art, life and humanity. But when his wife Lea finds a Spanish woman, Merce, on the run from Franco’s army and offers her the chance to live in the artist’s studio, Marc inadvertently finds himself with an attractive young model for what will be his last sculpture. In the quiet of his mountain workshop the artist and the model talk simply and openly about life and the world around them. Slowly a beautiful relationship develops between the young girl, just starting out in life, and the old man who senses his end is approaching. Directed by the Oscar-winning director of Belle Epoque and Chico and Rita. With thanks to Axiom Films.

New titles on the Booking Scheme

After over 100 years of celluloid film being the format of choice for cinema exhibition and filmmaking it now faces decline in the face of digital. Kenneally’s documentary, presented by Keanu Reeves, asks some of the film industry’s greats: is film dead? And what is the future of the medium? Featuring interviews with James Cameron, Martin Scorsese, David Lynch, David Fincher and Steven Soderbergh Side by Side is both a fierce debate and a heartfelt celebration of cinema featuring some of those who have defined the course of the industry.

Inspired by the work of Father Carlos Mugica White Elephant is a powerful film about two Catholic priests who work tirelessly to try to build a hospital in a poverty-stricken slum in Beunos Aires. Nicolas has returned from a failed project in the jungle where paramilitaries attacked the community he was working in. He finds his faith shaken by the failure of his work, and of the continuing violence and suffering within his community. Nevertheless he is bolstered by the support of Julián, his fellow priest and Luciana a social worker. A tremendous film about the power of conscience and the social justice.

An immersive documentary about the tiny remote village of Niaqornat in Greenland which has a population of just 59. The town is in decline, a few years ago the fish factory was closed down and a lack of jobs has resulted in a dwindling population. The government is threatening to stop subsidising the supply ship that attends the village – if that happens, the village is doomed. As a result the town pull together and plan to buy ownership of the factory as a co-operative. Not all of the villagers, however, are interested. Lars is one of the only teenagers in the town, and the only one with no interest in hunting or working in the factory. Instead Lars wants to escape to a bigger town and maybe even meet a girl.

An 11 year old girl, Elizabeth, becomes convinced that Dolly Parton is her biological mother after she learns that she’s adopted. Thus she embarks on an epic journey across the States in order to be reunited with Parton. The year is 1976, at the height of Dolly Parton’s fame and Elizabeth knows she can find Dolly Parton at a huge concert in Minneapolis. Her adopted mother sets off to find Elizabeth and have a second chance at being a family. 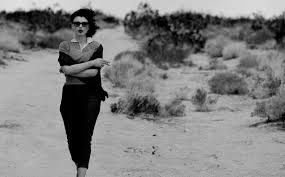 Joshua Tree follows James Dean on his first steps to becoming the international icon of youth and rebellion. The film is a series of revealing and sometimes dreamlike vignettes that blend autobiographical and fictionalised elements to present a pivotal moment in a remarkable life.

Vito Russo is one of the most influential film theorists and is responsible for bringing filmmaking out of the “celluloid closet”. Vito became politicized early in his career and was an important activist campaigning against negative LGBT representation in the media and film. He was a co-founder of GLAAD (Gay and Lesbian Alliance Against Defamation) and became an academic and television personality. His life’s work has had a profound impact on LGBT communities and Schwarz’s documentary is an astute exploration of his life.

A charming and uplifting romantic comedy about a young pharmacist obsessed with the films of Woody Allen,  who she defers to for life advice. Her family, frustrated by her disinterest in settling down, continually try to set her up with dates. Finally she meets a man who seems perfect – handsome, successful and actually interesting for a change – but something is still holding her back.

← Just In: Out in the Dark
The films of the BFFS Conference – reactions, notes and how to screen them →