Though I’ve posting on here a bit already, while volunteering in the BFFS office, I have just started as  the new Booking Scheme Coordinator.

So what better way to introduce myself than by talking about some films that I love? Following on from Bryony’s post I’ve selected a fantasy film society programme that, if I ran a film society or community cinema, I would want to show.

I love the idea of showing films in venues with a lot of character and history. Our cities are full of old, forgotten buildings and opening up these spaces to screen films in would be fantastic. I’d want my cinema to be a huge step away from characterless multiplex cinemas, and at a site that possesses its own atmosphere that could be utilised to support the films being shown.

The old Courtrooms in Sheffield for example would be a fantastic location.

It even houses a prison:

The first film is obviously important in announcing the new cinema to the surrounding community. As such I’ve chosen something well known but which ties in perfectly to the setting.

This classic courtoom drama (though it takes place almost entirely in the juror’s room) is almost certainly going to have been seen by many of my potential audience but it’s such a powerful and engaging film that repeated viewings do nothing to diminish the enjoyment. It also fits the venue perfectly and would be a fitting, unique and exciting first screening.

Midnight screenings are always a lot of fun and normally attract a dedicated and enthusiastic audience – so a perfect fit would be this Japanese cult classic. A reformulation of the Lord of the Flies set-up, Battle Royale adds satire to the mix with the worst-behaved school class of the year being deliberately marooned on an island and tasked with killing each other off until the last one standing can escape. It’s a savage attack on Japan’s social system but doesn’t berate you with its politics, instead concentrating on dark humour, action and super-cool style.

The opportunity of selecting a film programme obviously means you can force some personal and overlooked favourites on an unsuspecting audience and that’s what I’m going to do. Although Tarsem has failed to live up to the promise shown in The Fall, his second film and the only one he has made outside of the studio system, this film is an imaginative, beautiful and downright stunning piece of cinema. Filmed in some of the most incredible places in the world, the film centres on a little girl, Alexandria, hospitalised with a broken arm who befriends a depressed and suicidal stunt-man, Roy. He tells her a story of five mythical heroes, which we then witness through her imagination, but as the story goes on the line between the story and the real world begins to falter.

I programmed this film as my Chair’s choice while in Film Unit and it was a tremendous experience to introduce this overlooked film to a new audience, and the reactions from the audience were fantastic, so I’d love to do it again.

It took a long time for Peppermint Candy to become available on the UK and I originally saw it on an imported copy. Now, however, thanks to Third Window it’s available in the UK and it is well worth seeing.

Framed around flashbacks, the film starts with Yong-Ho stumbling into a reunion of his once-fellow students before climbing onto a nearby railway bridge and awaiting his end. The film continues by unravelling Yong-Ho’s past and the events that led to his eventual suicide. The film explores both Yong-Ho’s history, but also South Korea’s recent history, as the turbulent events in Korea during the late 20th Century force Yong-Ho further and further from his youthful dreams.

Asian cinema can often get pigeon-holed as mostly serving genre audiences, but this is an outstanding and powerful drama that provides an intimate look at real life. It is the kind of film, all too easily missed, which relies on an inquisitive and culturally aware audience to find a home and that is well served by community cinemas. 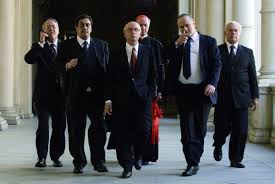 Il Divo is a wild and almost schizophrenic film, blasting the viewing with so many rumours, murders, scandals and elections that it’s almost impossible to keep track of what’s going on. For a biopic it’s remarkably bold – full of stylish and surreal flourishes (skateboarding politicians, whip-pans and an opening scene that presents Andreotti as a migraine-suffering Hellraiser), and the viewer could be forgiven for thinking that this isn’t the best way to document Andreotti’s career. But given how much speculation and uncertainty remains about the darker side of Andreotti’s political life (accusations of Mafia ties have followed Andreotti for years) the films opts for surpassing accuracy with a sort of heightened reality – it might not be entirely true (though it could be) but it does give us a sense of the almost unbelievable nature of Italy’s political system. It is also an absurdly entertaining piece of cinema.

Nichols is very much a filmmaker to keep an eye on, having made three feature films in just 5 years he has continual improvement. Mud, released this May is a well-crafted mix of coming-of-age drama and crime thriller. Set on the banks of the Mississippi river, Ellis and his best friend Neckbone find a boat washed up on an empty island, that unbeknownst to them has become the home of a fugitive known only as Mud (a never-better Matthew McConaughey). Once the boys stumble upon the eponymous Mud, he enlists their help in repairing the boat so Mud can escape.

At times a delicate and moving film Mud is a deeply moving and profound look at the process by which we come to learn the complexities of life, who we can and can’t trust and the contradictory, frustrating nature of adult relationships. It is a fantastic piece of work and a fine example of the strength of independent cinema. As a new film which saw a limited release it is also one that audiences may well have missed.

So that’s my programme – what would you show if you could programme a whole season of films at a local community cinema, and why?

All of the films in this programme are available for non-theatrical screenings, several of them through BFFS.